Women, Rights, and the ERA

This article was written and published in 2003.  Today, the ERA remains unratified while the overwhelming majority of Americans think it is law.   This raises several issues we will be addressing here at the Women's Institute in the coming weeks.

The first is confusion over the biological differences between men and women and why gender and these differences should be ignored by government.

The second issue is the successful campaign to persuade Americans the ERA had been ratified, which was an expensive, and successful dis-information campaign.

The third issue is the reframing of law and the appropriate functions of government.

The fourth issue is how we deliver real opportunity for all of us and put the issue gender to bed (so to speak) as we get on with realizing our full potential as individuals. 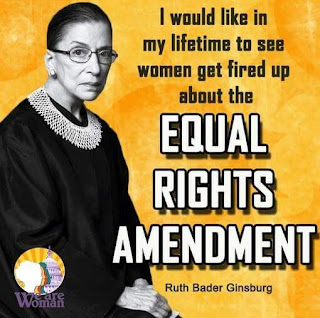 
Wording of the Equal Rights Amendment

Equality of rights under the law shall not be denied or abridged by the United States or by any state on account of sex.

You are a woman; you are living at the dawn of the third millennium and you think you are equal under the law. You are wrong, wrong because although the American people from both genders, every age group and part of the country have overwhelmingly believe in equal rights for male and female citizens, still, the Constitution, the highest law in the land, contains no wording that extends fully equal citizens' rights to women.

For equality to be more than a provisional privilege there must be an amendment to the existing Constitution that is ratified by 3/4 of the state legislatures.

It has not happened.

The newly passed ERA was sent to the states from Congress in 1972 and everyone believed that it would be ratified by the required 38 states quickly but instead it became a political football linked to issues that have nothing to do with simple equality. Women like Phyllis Schlafly have made careers of opposing an equality that is essential to women – and to our culture as a whole.

What happened instead was a series of laws that assert 'fairness', many passed on the state level. On these women hang their trust that their rights are protected – but each of these laws can be overturned through the actions of the Supreme Court; Without the clear and specific backing of the federal Constitution, even the best laws improving women's rights and opportunities can (and often are) weakened, poorly (or never) enforced, or even overturned.

Now that you understand this, consider the future make up of the Supreme Court. Do you feel safe?

This is how it is, but it is not the whole story. There is hope.

In 2000 a retired research psychologist in Central New Jersey, was asked to speak to a group of Girl Scouts on equality for women. Jennifer Macleod, the speaker, was still active in the local chapter of NOW she cofounded in 1969. She spoke to the troop and, enthused and ready for more, the girls asked for a project they could undertake related to the ERA. Jennifer, an expert in survey research, made up a short questionnaire and showed the girls how polling must be done to accurately reflect the opinions of those polled.

There were three questions. Jennifer expected the Girl Scouts, polling their classmates, teachers, and parents, to find a range of opinions on equality for women. Instead, they found close to unanimous support for the concept.

That was the beginning of the ERA Campaign Network and their campaigning for the Equal Rights Amendment on the basis of what is called the Three State Strategy.

The Constitution, in setting forth how amendments can be made, said NOTHING about any time limits -- although, as was the case for several amendments, a time limit can if desired be included in the body of a proposed amendment. The 1972 Congress, in passing the ERA -- which, fully intentionally, contains no mention of any time limit -- chose to attach a 7-year ratification time limit separate from the amendment itself. Then, when the 1979 Congress extended the time limit by 3 years, that set the precedent such that any Congress can legitimately vote to change such a time limit.

How could equality ever fail to be relevant? In an era when women are serving in the military in roles that expose them to combat the arguments that they are frail and must be protected fail to persuade

So the ERA Campaign Network went to work to help obtain ratification in at least three more not-yet-ratified states.

Vigorous ratification drives are well underway in Illinois (which came very close to ratification in 2004), Florida and Missouri, with many of the other not-yet-ratified states, including Arkansas, Arizona, Georgia, Louisiana, and Oklahoma, building support for their own ratification

Additionally, awareness is growing of the need to affirm equality for women in the face of the interests who prefer women in the status of second class citizens.  Protection not internal to the Constitution is meaningless and temporary, open to the whims of legislatures and the courts.

It needs to happen and, startled that it has not, Americans are working to see that it does.

The states that are not yet ratified are:

The states that have failed to ratify are nearly all Southern. To help jump start efforts in these states the ERA Campaign Network has formed caucuses for each unratified state. These are to promote communication and activism from ERA supporters who are now living in states that have
ratified but came from states that have still to do so.

We may leave our state but we keep our friends, school chums and family. With help from the Internet former southerners are creating a network to build understanding and support for the ongoing effort. The threads of connection are weaving new patterns for women across the nation, connections that will ensure that girls growing up now will have their rights secured to them as individuals.
Posted by Melinda Pillsbury-Foster at 1:33 PM